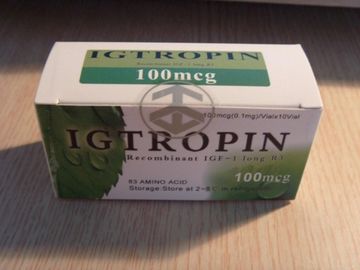 1 . IGF-1 is mainly responsible for long bone growth in children and it also affects muscle growth and repair of adults. Long R3 IGF-1 is a more potent version of IGF-1.

2 . IGF-LR3 greatly boosts muscle mass by inducing a state of muscle hyperplasia (increase in number of new muscle cells) in the muscle where it's injected! So think of it as muscle cell proliferation, or even the splitting of the cell so 1 becomes 2…And it can cause the enhanced recovery of testicle size, and prevent muscle loss even in PCT.

3 . Igf1-lr3 As you all know is the long acting version of Igf-1, Taking its active potential up towards 20 hours.

3 . potent effect on fat metabolism and helps the body to burn fat rapidly

4 . improves mental functions such as reflexes and learning ability

5 . IGF-1 LR3 is widely used by bodybuilders, but it not recommended for inexperienced ones.