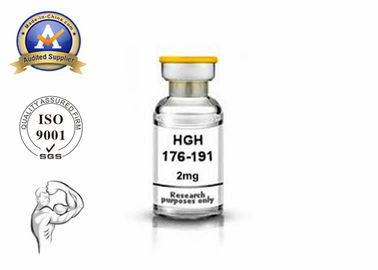 HGH Frag 176-191 is a fragment of the HGH peptide.It regulated fat loss 12.5 times better than regular HGH. Fragment (176-191) is a fat-loss peptide derived from the GH molecule, which directly initiates lipolysis and inhibits lipogenesis.

It works by mimicking the way natural hghs regulates fat metabolism but without the adverse effects on insulin sensitivity (blood sugar) or cell proliferation (muscle growth) .the HG fragment 176-191 stimulates lipolysis (breaking down of fat) and inhibits lipogenesis

In most studies favorable results have been shown with dosages between 400-600mcg or 4-6mcg/kg split into multiple dosages per day.

A typical beginner protocol would be:

A typical intermediate protocol would be:

A typical advance protocol would be:

Fragment (176-191) is a fat-loss peptide derived from the GH molecule, which directly initiates lipolysis and inhibits lipogenesis, but in order to better understand this peptide, it is imperative to have at least a rudimentary understanding of its parent hormone .

GH is a polypeptide which contains an amino acid sequence that is 191 amino acids in length. Frag (176-191) was developed by isolating and modifying the specific portion of the GH molecule responsible for the hormone's lipolytic and anti-lipogenic effects.

The portion of the molecule responsible for these effects is amino acids 176-191. In every sense, Frag should primarily be considered a fat loss peptide which performs these functions through the same pathways as traditional GH, but without exposing the user to the potentially undesirable side effects which may present themselves during GH administration.