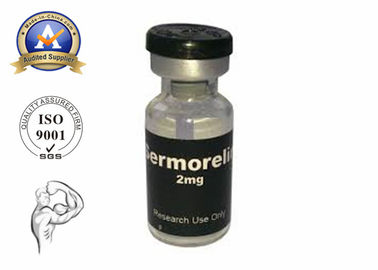 Sermorelin does increase the rate of growth in GH-responsive CRF children, though it has no appreciable effect on the course of the CRF.Sermorelin can be used in research to diagnose cases of GH deficiency, stimulates GH secretion from the adenohypophysis, manage GH insufficiency and increase the rate of growth in GH-responsive CRF children.
GH also promotes efficient energy metabolism. Studies have also shown that GHRH directly promotes slow wave NREM (non-rapid eye movement) sleep, and thus GHRH insufficiency causes a reduction in the amount and intensity of slow wave NREM sleep which results in either insomnia or dysomnia(sleep disorders that causes sleep to lose its restorative capacity). inhibits GH secretion from the adenohypophysis. Both GHRH and somatostatin are produced in the same neuron but they are released in alternation to each other thereby resulting in the pulsatile release of GH from the neuron.
Sermorelin therapy increased the volume of hormone secreted by the stimulated pituitary gland, which is later converted by the liver into IGF-1. The increased amount of IGF-1 in the blood stream leads to many benefits from the use of Sermorelin: increasing metabolism and growth of new cells within the body's organs and bones.