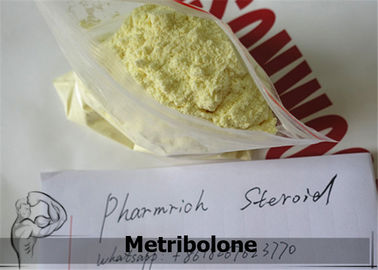 methyltrienolone (also known as: R1881)
Metribolone is an extremely potent oral anabolic steroid which was first developed in the mid 1960’s and is considered one of the most anabolic steroids ever made. It was first used to treat advanced breast cancer and, although successful, was decidedly too harsh on the body. It has strong anabolic properties and is very effective at promoting muscle tissue growth. Although a risky steroid, a minority of bodybuilders still use Metribolone thanks to its low price and potency.

Metribolone, which is as much as 300 times more potent than testosterone, can have a measurable effect on an individual with as little a dosage as .5 mg a day. It has no estrogenic activity and thus it does not cause water retention which can hide muscles. This results in lean muscle gain which ends up looking very defined and hard. However, due to its binding affinity to progesterone, Metribolone can still produce undesirable side effects (detailed below), especially when stacked with other estrogen promoting steroids. Metribolone works by enhancing the body’s ability to absorb nutrients from food, build muscles with protein and nitrogen, lower stress hormone levels (such as cortisol), and raise the body’s red blood cell count. It is most useful as a pre-contest cutting agent.

Unfortunately, the downfall of this steroid is its high toxicity which can damage the liver quite dramatically. As one may expect, Metribolone is not recommended for therapeutic purposes nor is it advised for inexperienced bodybuilders. Users should be very careful and adhere strictly to the instructions following. Within the bodybuilding community it is suggested that users take a dosage of no more than 500-750 mcg per day for no more than 4 weeks. Women should not take Metribolone, not only for its deleterious liver effects, but also for its strong masculinizing effects. Metribolone should be ingested on an empty stomach as fat from foods can absorb the drug thus decreasing effectiveness. Users should also refrain from using any other oral steroids and from drinking while on Metribolone as their liver is already being taxed significantly.

Side effects can include increased body hair growth, acne, oily skin, testosterone suppression, male pattern hair loss, increased liver toxicity, decreased libido and erectile dysfunction, gynomastia (progesterone), and negatively affect lipid and cholesterol levels (which can increase the risk of cardiovascular disease). Users should have their liver monitored by a doctor regularly to avoid damaging it. Liver detoxifiers are recommended if using Metribolone. However, many of these side effects can be alleviated with the proper supplements. Dosages beyond those recommended can result in jaundice. Women, who are not advised to take Metribolone, are at risk for masculinization, such as a change in skin texture, deepening in their voice, body and facial hair growth, menstrual irregularities, and clitoris enlargement. If such symptoms occur, users should stop taking Metribolone immediately as the changes could become permanent.