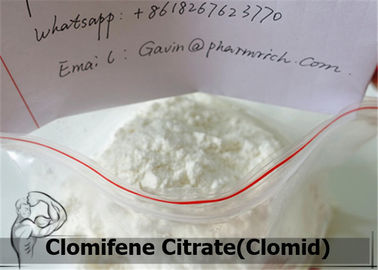 What is Clomifene Citrate Used for :

Clomiphene citrate, a.k.a Clomifene Citrate, it is not an anabolic steroid, but a prescription drug generally

prescribed to women as a fertility aid. Clomiphene citrate stimulates the body's own production of

testosterone and it doesn't interfere with the body's checks and balances of testosterone.

Clomifene Citrate is a drug given to women for use as a fertility aid. Clomifene Citrate, however, is much weaker than Nolvadex in a mg for mg comparison, with roughly 150mgs of Clomifene Citrate being equal to 20mgs of Nolvadex (1). It should be noted, however, that 150mgs of Clomifene Citrate will still raise to approximately 150% of baseline value(1). You don´t have to use 150mgs, however; In my research, I´ve found that doses as low as 50mgs will show improvements and elevations In fact, my original Post-Cycle-Therapy regime (as suggested by Dan Duchaine in the original Underground Steroid Handbook) was 100mgs per day for a week and 50mgs/day for a week. Don´t laugh& for the late 90´s, when most anabolic steroid users didn´t even know how to use Clomifene Citrate, it was considered a "state of the art" PCT routine. I suspect that Duchaine originally introduced this compound to the steroid using community.

Clomifene Citrate, just like Nolvadex, is very safe for long term treatment of lowered with some studies showing its safety and efficacy for up to four months. And post-cycle, when steroid users are suffering form lowered , is when Clomifene Citrate is most effective.

Proper Clomid Dosage - PCT:
Beginning at 150mg per day for at least a couple weeks and then slowly tapering down. While a 150mg per day Clomid dosage can be very effective.

Proper Clomid Dosage - On Cycle:
Some performance enhancing athletes will supplement with Clomid during their actual anabolic steroid cycle itself in an effort to stave off Gynecomastia. Clomid dosage of approximately 50mg per day should suffice