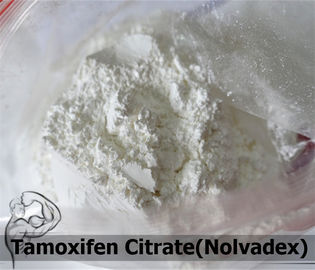 Nolvadex (Tamoxifen citrate) is very comparable to Clomid, behaves in the same manner in all tissues, and is a mixed estrogen agonist/antagonist of the same type as Clomid. The two molecules are also very similar in structure. It is not correct that Nolvadex reduces levels of estrogen: rather, it blocks estrogen from estrogen receptors and, in those tissues where it is an antagonist, causes the receptor to do nothing.

The belief that it reduces gains seems to stem from the fact that the scientific literature reports a slight reduction in IGF-1 (individuals using anabolic steroids were not studied though) from use of Nolvadex.

Thus, Dan Duchaine reported that it reduces IGF-1 and therefore reduces gains. However, if this effect exists at all, it must be very minor, due to the excellent gains that many have made, and from the fact that no one has noticed any such thing from Clomid, which has the same activity profile.

The fact that Nolvadex will reduce water retention may result in the user agreeing that gains are less, since weight gain is less, thus reinforcing the bias.,

Nolvadex is the trade name for the drug tamoxifen citrate, it is a non-steroidal agent that demonstrates potent anti-estrogenic properties. The drug is technically an estrogen agonist/antagonist, which competitively binds to estrogen receptors in various target tissues. With the tamoxifen molecule bound to this receptor, estrogen is blocked from exerting any action, and an anti-estrogenic effect is achieved.

Since many forms of breast cancer are responsive to estrogen, the ability of tamoxifen citrate to block its action in such cells has proven to be a very effective treatment. It is also utilized successfully as a preventative measure, taken by people with an extremely high familial tendency for breast cancer. While Nolvadex is effective against estrogen, it is not our strongest available remedy. We now have the drugs Arimidex, Femara, and Aromasin available to us, which notably prevents estrogen from being manufactured in the first place. Altering the effect of estrogen in the female body can cause a level of discomfort, so anti-estrogens are most bearable when used after the point of menopause. Since Nolvadex is milder in comparison, it is more widely applicable and usually the first treatment option.

Nolvadex is an estrogen agonist in the liver, capable of activating the estrogen receptor and mimicking the actions of this sex hormone in this region of the body. As such it can have a markedly positive impact on HDL (good) cholesterol values, as does estrogen. Many similarly use this drug to counter some of the negative consequences of steroid use in regards to cholesterol values and cardiac risk, as steroids often suppress HDL and raise LDL levels considerably. in some instances an athlete is able to maintain a very favorable HDL/LDL cholesterol ratio, to spite the use of a mode rate dosage (400mg weekly) of an injectable like testosterone or nandrolone. It would be foolish to think however that Nolvadex would be a sufficient remedy with the heavy use of c-l7alpha alkylated orals or extremely high dosed cycles in general.