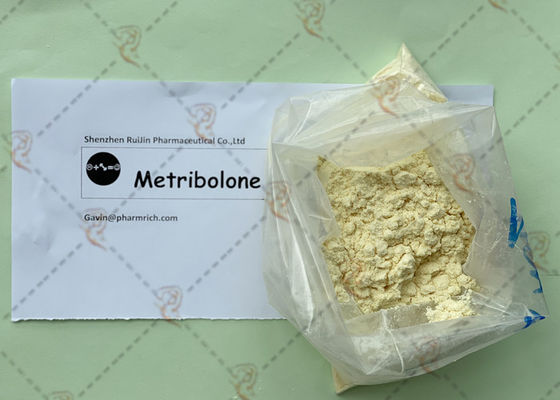 1:Metribolone, also called methyltrienolone, is a potent oral anabolic steroid that was originally developed in the 1960's to treat advanced breast cancer. However, it was quickly pulled from the market because of its harsh side effects on the body, especially the liver. Therefore, today it is used in research only.

2:Just like with most steroids, bodybuilders and athletes have experimented with this steroid since then, but due to its harshness and rarity, it's not popular at all.

4:Metribolone binds onto the AR receptor so strongly that it is pretty much the benchmark for that quality.Androgen Receptors are found in both fat cells as well as muscle cells; they act on the AR in muscle cells to promote growth, and in the fat cells to affect fat burning.The stronger the androgen binds to the A.R, the higher the lipolytic fat burning effect on adipose fattissue. MT is basically a 17aa (oral) version of (injectable) Trenbolone. AR binding and AR stimulation is not the only mechanism which stimulates anabolism.

5:Metribolone is an anabolic steroid that is available for oral administration as tablets and is available also as injection.

Generally, most of the users tend to take metribolone for a shorter period of time at the room temperature below 30 degrees C.

6:Metribolone is steroid hormone which can increase muscular endurance and explosive power,it is the most powerful anabolic steroids ever producedIt can also Treatment of advanced and recurrent breast cancer and ovarian cancer and other diseases.