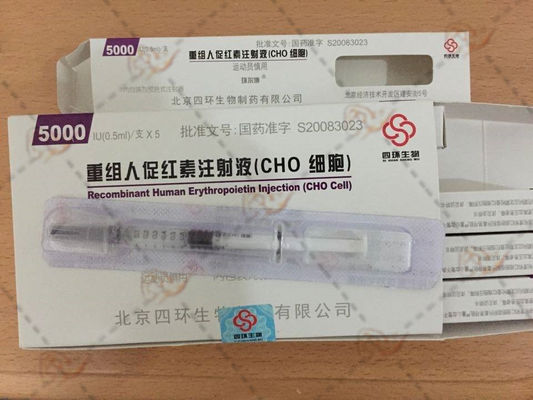 Erythropoietin (EPO) is a glycoprotein hormone of 34–38 kDa which stimulates proliferation and differentiation of erythroid precursor cells (CFU-E, BFU-E) to more mature erythrocytes. EPO is primarily produced in adult kidney and fetal liver cells. Cells responsive to EPO have been identified in adult bone marrow, fetal liver or adult spleen. In cultures of erythropoietic progenitor cells, EPO stimulates the proliferation and differentiation of these cells to more mature red blood cells.
Erythropoietin (EPO) regulates the level of erythrocytes in response to the level of oxygen in the blood. When tissues meet hypoxic conditions, the EPO level in the blood increases, and the elevated EPO level triggers differentiation of progenitor cells in bone marrow and release of erythrocytes from bone marrow into the blood.

Also known as hematopoietin or hemopoietin, EPO is produced by interstitial fibroblasts in the kidney in close association with peritubular capillary and tubular epithelial tubule. It is also produced in perisinusoidal cells in the liver. While liver production predominates in the fetal and perinatal period, renal production is predominant during adulthood. In addition to erythropoiesis, erythropoietin also has other known biological functions. For example, it plays an important role in the brain's response to neuronal injury. EPO is also involved in the wound healing process.