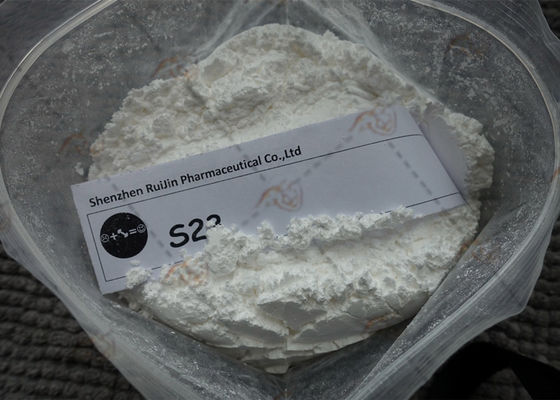 S23 is an orally active nonsteroidal SARM with a very high binding affinity to androgen receptors. This makes it stronger than other popular SARMS like Ostabolic (mk-2866) or Andarine (S-4). Therefore, the main effects of S-23 are increased muscle mass, decreased fat mass, and a decrease in the size of the prostate.

Additionally, in a study done on rats a dose equivalent to 15 milligrams (mg) for a 180lb male was shown to also increase bone mineral density, as well as promote muscle mass growth and fat loss. Hence, S-23 is versatile in that it can be used for bulking and for cutting.

S23 belongs to a new class of drugs called selective androgen receptor modulators (SARM). SARMs mimic testosterone by binding to hormone receptors in specific parts of the body.
Similar to testosterone and other SARMs, researchers hypothesized that S23 targets the muscle and bone tissues to promote muscle growth and bone health. Some blogs cite animal studies in which S23 reduced the size of the prostate. However, clinical trials are completely lacking to back up any of these claims.

In reality, the “SARMs selectivity theory” might be completely false. It has never been proven, and SARMs like S23 never passed proper clinical trials. SARMs may turn out to be much more dangerous than previously thought.

S23 is becoming increasingly popular in the bodybuilding community. It is allegedly effective at increasing muscle mass and decreasing fat all while having minimal side effects. However, S23 can deplete testosterone levels, which requires users to need unapproved post-cycle therapy (PCT).

This SARM has attracted strong interest for its potential to be used as male birth control. In rats, S23 led to infertility in 100% of the cases. The triggered infertility was temporary and could be completely reversed after stopping the drug.

Research has explored the use of S23 for increasing sexual motivation in women. Other potential uses include preventing muscle loss and increasing bone density.

It is important to note that S23 has not been studied in humans and is not approved for human use. Currently, all SARMs are banned in professional sports by the World Anti-Doping Agency.

Dosages of S-23 can vary, and they will be very dependent on what the goal is. For instance, if a user were looking for muscle building and fat loss, a dose of 15-25 mgs per day would be appropriate. On the other hand, if someone was looking to use it for the contraceptive effects, a higher dose of

around 50 mgs per day would be more effective. Nonetheless, this is not recommended because there have not been studies done on humans to replicate the contraceptive effect shown in rats.

In spite of the fact that after 100 days the rats did recover natural testosterone levels, humans would need to run a full PCT (Post Cycle Therapy). Since S-23 causes severe suppression, I would always recommend the Perfect PCT.

S-23 not only boosted muscle mass, but also reduced fat mass, as studied. SARMs have a bit of a 'soft' image in the doping world. They don't stimulate muscle growth in the way that anabolic steroids do, but many users say that they are safer.

There are no studies yet that confirm this suspicion. But that S23 is not one of the safer SARMs - we'd be willing to wager a bottle of BCAAs on that. S23 halts the production of sperm in the testes. In fact it does this so well that the researchers suspect S23 might be a good candidate for a male contraceptive. If this is the case it would probably have to be part of a cocktail that also contains an estradiol analogue, the researchers discovered. The lab animals lost their libido when they were given S23 on its own, and only recovered this when they were given estradiol benzoate together with the S23.