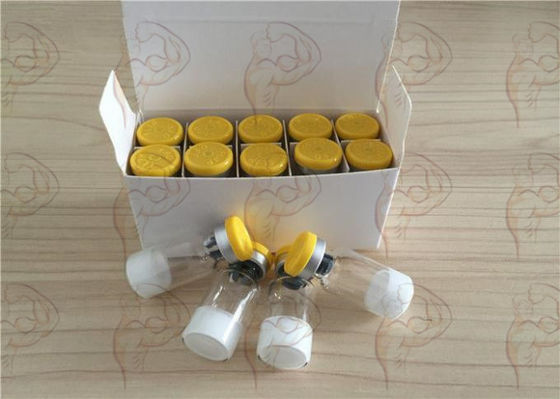 Despite it being third in class as far as strength of GH release, GHRP-6 is still a potent GHRP and can be taken 2-3 times per day. Though there is a slight issue, GHRP-6 has been shown to not be as effective in the presence of elevated blood glucose levels. As a result, I believe the best practice for GHRP-6 dosing is to dose 2 hours after your last meal and 30 minutes before you take in any food, so that no interactions weaken the effect of GHRP-6. Taking this into consideration, GHRP-6 can be taken 2-3 times a day (approximately 3 hours in between injections) for maximum effectiveness with a range of 100mcg-200mcg per dose.

GHRP-6 can lower body fat, increase muscle, increase strength ad increase stamina. It have recently become popular as performance enhancing drugs. Benefits of increased G Hormone levels through GHRP-6 stimulation include: an increase in strength, muscle mass and body fat loss, rejuvenation and strengthening of joints, connective tissue and bone mass. The principal use of GHRP-6 is to provide increased GH levels, which also results in increased IGF-1 levels. This aids fat loss and in some instances aids muscle gain as well. Generally, GHRP use is chosen as an alternate to GH use, and only rarely is combined with GH.

GHRP-6, also known as Releasing Hexapeptide, is a peptide hormone of the hormone class. As is with all related peptides, GHRP-6 is widely used to increase the amount of natural GH production in the body. And the increases in GH can be beneficial to anabolism, fat loss, recovery and general well being as well as serve possible anti-aging purposes.

Growth hormone releasing peptide-6 (GHRP-6) is in the category of drugs known as GH Secretagogues. This category of drugs includes GHRP-2, GHRP-6, Ipamorelin, and Hexarelin. Their primary function is to stimulate the pituitary gland to produce more Growth Hormone.

GHRPs have a 2-fold mechanism of action, in that they cause an increase in GH through amplifying the natural growth hormone releasing hormone (GHRH) signal transduction pathway, as well as by suppressing the actions of somatostatin.

GHRP-6 allows your body to naturally produce and release more human hormone, resulting in a greater secretion of IG-1 from the liver. GHRP-6 also affects the central nervous system, by protecting neurons as well as increasing strength in a way very similar to the way certain steroids do.

Users of this substance often report an increase in strength and muscle mass, along with an overall sense of better well being and decreased body fat. The peptide affects the neurons in a similar fashion that some steroids do causing a significant increase in strength.

GHRP-6 can also be used to stimulate the body's natural GH production after it has been slowed down due to synthetic GH use. It is important to note that moderate use of this peptide will usually be accompanied by a gain in water weight or bloat as it is often called. This may make the fat burning effects of the substance go unnoticed during use.

Lowers body fat: GHRP-6 administration has the reputation of lowering fat, making it a good option for bodybuilders in their cutting cycles. It is also extremely attractive to those people who are weight conscious and are looking to shed those extra pounds without working hard at the gym. Increase muscle: GHRP-6 administration also has the reputation of facilitating an increase and development in muscles. Increase stamina: Those users who are vouching for the drug claim improvement in stamina levels post the administration of GHRP-6. Protective and anti-inflammatory: GHRP-6 administration initiates better protection of the muscles and acts as an anti-inflammatory agent which is crucial in the muscle recovery process and synthesis. GHRP-6 also ensures that the liver is working to initiate IG.F-1 secretions helping you lose fat quicker and gain strength as the time passes by.