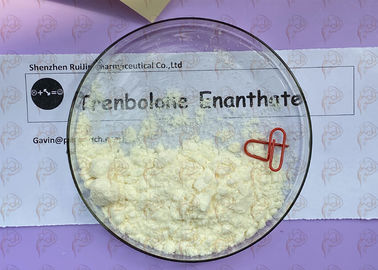 Appearance: pale yellow or yellow crystalline powder
Usage: Trenbolone Enanthate is only available from underground labs and was not designed for human consumption, although it is considered to be an ideal drug for bodybuilders who want to burn fat and gain muscle, although its long ester makes unwise for professional athletes who undergo testing to use.

Trenbolone Enanthate For Bulking and Cutting: dosages and workouts:

Trenbolone Enanthate only cycles should always have some form of testosterone included in the cycle. This is very important since Tren and all steroids will suppress the body’s natural production of testosterone. Here is a common eight week cycle:

A ten-week Trenbolone Enanthate cycle (with testosterone) is provided below:

Testosterone can be run at 200mg per week in both cycles listed above.

Tren Enanthate is not commonly used in solo cycles. More experienced/advanced steroid users will use this steroid in cutting cycles stacked with Test Enanthate or Cypionate, Masteron, Equipoise, Winstrol and/or Anavar. For bulking, users might stack Tren Enanthate with Dianabol or Anadrol and Deca-Durabolin.